Today, we continue visiting Andorra with the village of Pal. One of the most charming villages in the country.

The rapid growth of the Andorran population has had a couple of consequences on its general appearance. On the bad side, a quite chaotic and not very aesthetic surge of new constructions in many parts of the country, as well as more and more ski resorts. To the point that ski slopes now seem to be covering a large percentage of the country. On the good side, the influx of money has allowed for more sensible development here and there – including a special architecture protection plan since 1997. This plan not only literally protects some of the traditional villages of the country from being disfigured by new development projects, but it also aims at renovating them. Thanks to this program, many buildings in Pal and other villages have been renovated and now look relatively “new” while still retaining their original look and feel. 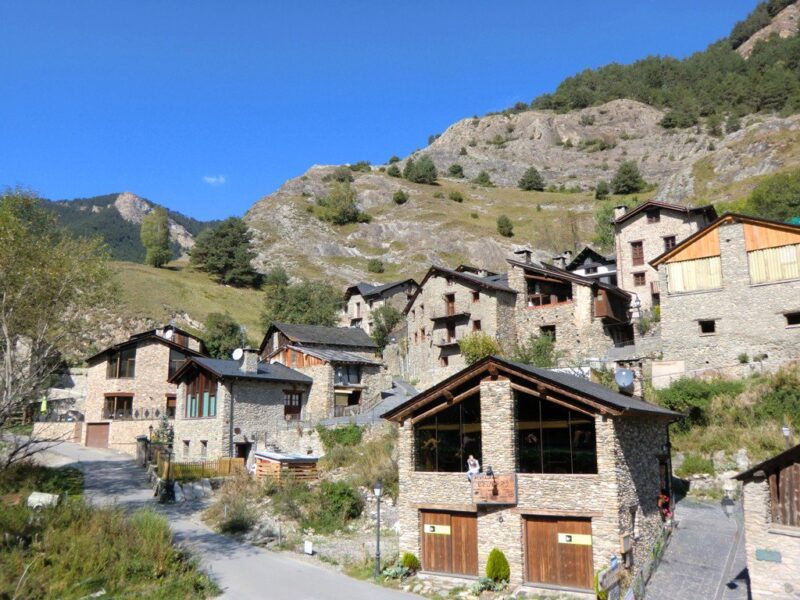 To be fully honest, some development has happened in Pal, but separately from the original village (behind me on this shot). Today, the village is really separated into two halves; a traditional one and a more modern one. However, I feel that the newer part is mostly rental apartments for the skiing season. I doubt that many people live there year-round.

In retrospect, I should have documented the modern part too, but back then – returning to Andorra after such a long hiatus (please, see the original post for more detail) – I was mostly in awe by how good the country looked compared to how I remembered it, so I was in a picturesque mood.

I really hope to return there when I’m in Europe, I’ll try to document more aspects of the country when that happens.

The main reason such a remote village is getting new additions and renovated buildings is that Pal is located on the way to the Pal Arinsal Ski Resort, one of the many ski resorts in Andorra. In other terms, while the village is calm and quaint in the summer, during the winter it may be a completely different story. Still, some people live there year-round, and it definitely must be a great place to live, at least in summer.

Apart from that, not much else to tell you about the village, except for the Sant Climent de Pal church. Another very old Andorran church in Andorra. And, just like Sant Joan de Caselles, while it had “recent” additions around the 17th-18th Centuries, the main nave as well as the bell tower date from the 11th-12th Centuries.

You will be able to find more information about Pal and the Sant Climent Church on Andorra’s official site.

After visiting the village, we drove up to the ski slopes and took these two pictures of the valley:

That’s all for today, but if you’re enjoying my Andorra series, rejoice, more is coming…