“Everyone is Awesome” by Lego

I wasn’t a big fan of Lego as a child. I had a few, played with them from time to time, but they were far from being my favorite toy. I actually fell into Lego as an adult. When becoming a father brought me back to toy stores after a long hiatus. I saw that Lego really had gone a long way since the last time I paid attention. They had Lord of the Rings sets! Can you imagine? I got curious. I bought one set, and then another, and another… And well, today, I can be considered an AFOL (Adult Fan Of Lego). Yes, there’s even a somewhat official acronym for it.

The thing is that AFOLs are a growing demographics, and the Lego Company has noticed. They have produced more and more sets aimed at adults in recent years, and they even officially acknowledged the thing last year by launching the “Adults Welcome” campaign/collection with sets explicitly made for adults.

The problem is that I don’t find myself too interested in those. Either they’re just not my cup of tea, like the current “Art” series. Or they totally are my cup of tea, but definitely not in my price range. That’s one of my issues with the sets aimed at adults, most are actually aimed at rich adults with a lot of disposable income.

Still, there recently have been some sets aimed at adults with decent prices, and I may buy this bonsai sooner or later.

And last Spring, they released a set that became an instant favorite of many people, including myself.

I think Lego did several great things with this very unique set, and I want to introduce it to you today.

First of all, this title is a clear reference to the Lego Movie and its song, Everything is Awesome. If you know, the song, now that I’ve mentioned it, it’s probably stuck in your head for the rest of the day. If you don’t know it, there is no reason it doesn’t get stuck in your head too, so you can listen to it there.

Oh, and by the way, if you haven’t seen the movie, please watch it. It is a genuinely good movie. Yes, for real.

I’m actually a bit surprised that they chose this title – I assume it’s for easy recognition – because, in the movie, there is a certain degree of irony and sarcasm in this title. The title of this set is not sarcastic at all. The point of the set is that everyone is indeed awesome. Unironically.

Let me show you the box, and I think you’ll understand right away. 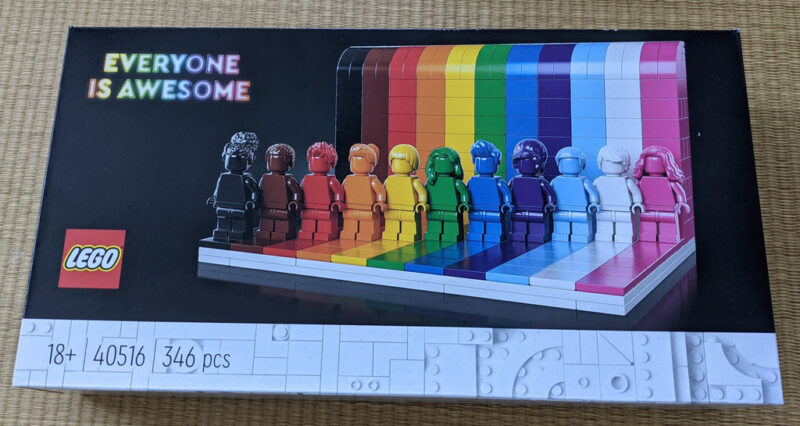 The meaning of “Everyone is Awesome” is not that we’ll all get a participation trophies. It’s about inclusivity. It’s about recognizing and respecting differences, be them racial, sexual, and more.

It’s obviously not a coincidence that it was released for Pride Month, but I also strongly believe that it’s a genuine move from Lego, not just some “Rainbow Washing.”

Here is what the designer of the set had to say about it. Because yes, the designer left a note of intent, which you don’t usually find in regular sets.

I wanted to create a model that is a symbol of inclusivity, that celebrates everyone, no matter how they identify or who they love. Everyone is unique, and with a little more love, acceptance and understanding in the world, we can all feel free to be our true AWESOME selves! This model is to show that we care, and that we truly believe ‘Everyone is awesome’! We hope you’ll build this model and display it with pride. It’s a celebration of love – a celebration of you!”

I think that it’s, indeed, awesome that Lego is sending such a clear message.

And I think that the set is just awesome overall.

I could be wrong, but it’s probably the first time that Lego produces a set that’s highly conceptual in the way this one. A set that is pretty much a work of art and nothing else.

My only gripe, really, is that it is marketed as “for adults.” I’m afraid that this 18+ could send the wrong message. That inclusiveness, anti-racism and acceptance of all gender identities and sexual preferences is an adult matter. Of course, it’s not.

This 18+ is actually based on other criteria, mostly that the set offers no “play value.” It is for display only. People who are not Lego geeks won’t know that it is the reason for this “adult only” category.

Now, are people who are not Lego geeks or AFOLs even aware of the existence of this set? I’m not sure. Well, now you are.

Back in the days, I had a blog dedicated to Lego. It’s still online at the time I’m typing this, but it hasn’t been updated in years (I’m planning on importing the most interesting posts here or on Liminal Web eventually). When building an interesting set, I used to post pictures of the build. I’m not sure if it was of any interest to anyone, but I thought it made for fun pictures sometimes, especially when including the minifigures as if they were building the set or something.

Well, I did something a bit similar here. Enjoy.

As you can see, there is more to the wall than just stacking bricks. That’s one of the little talked about things I love about building Lego sets. There are a lot of hidden surprises that you only see as you build your set, and that become invisible once the build is finished.

And talking about the finished product, here it is:

So, yes, a truly awesome set.

I think it’s only available online, through the official lego website, for the price of €/USD 34.99. Order yours before it’s sold out.