I watched the first two episodes of the Bad Batch, the latest animated Star Wars TV show available on Disney+ and… I liked it.

It’s about a bunch of “defective” clones from the clone wars era and their adventures, starting right at the end of said clone wars and the beginning of the Galactic Empire.

I put “defective” into quotation marks because while different from regular clones, they’re quite functional, even more than regular clones to a certain extent. I wouldn’t go as far as saying that they have superpowers, but close enough. One is much stronger than average, another one is much smarter, and so on. What makes them “defective” is that their programming is, which gives them quite a personality and much more free will than regular clones. Also, they’re immune to Order 66 (you know the command that was embedded in every clone in order to make them kill all the Jedi without thinking twice once activated).

So yes, they’re a group of “outcast clones” and they’re about to have a bunch of adventures in an interesting and unexplored era of the Star Wars universe: the first days of the Empire.

Here is a list of random thoughts I had while watching and right after watching.

First of all, Dave Filoni is the showrunner. I assume it has its importance. Many say that he’s been the torchbearer of Lucas’s vision of Star Wars post Revenge of the Sith, and yes, I guess he’s something like that. What he is for sure is a great screenwriter. He has a way to make you care about characters, to make them live in this universe, that very few people have. I discovered him with Rebels, and I can say today that the Rebels crew are some of my favorite Star Wars characters, on par with the original trilogy heroes.

Also, he clearly knows the Star Wars universe in and out, and he’s very good at intertwining his stories, having his characters jumping from one show to the other without it ever feeling forced (Jon Favreau is not alone in charge of the Mandalorian, he’s had help from Filoni to create this awesome narrative).
It is the case here too. The whole show starts like an episode of Clone Wars (title logo and voice-over intro included), guest-starring Caleb Dume (who we will know later as Kanan Jarrus) before introducing the title characters and quickly shifting in tone and focus right as Order 66 is enacted.

Even the title characters are not entirely new, they previously appeared in Clone Wars.

Difficult not to compare the two shows (once again, the first minutes of Bad Batch are literally an episode of Clone Wars), but I find this comparison favorable to the Bad Batch.

Disclaimer: I’m not really a fan of Clone Wars. Partly because I dislike Episodes 1, 2, and 3 of Star Wars (Clone Wars takes place between episodes 2 and 3). Partly, because I have trouble finding clones interesting, and I only like the Jedi when they’re clueless apprentices or half-crazy old hermits, I’m afraid. Not so much when they’re a religious organization full of hubris and that steals babies from their families to enroll them and brainwash them into their creed.
Also, the militaristic tones of Clone Wars are not really my thing. I mean, it has some good episodes, but overall…Meh…
Caveat: everyone tells me that it gets better and better and indeed, it does. Seasons 1 and 2 were just a bore, seasons 3 and 4 were watchable for the most part, and I just started season 5.
Why am I watching, still? I guess it’s the completist in me. But you need to understand that I started watching it about four years ago… and I just started season 5. That’s how fast I’m watching it.

Anyways, comparing both shows, the Bad Batch is instantly better in my opinion because one of the main weaknesses of Clone Wars is that clones are just not interesting characters. They’re all the same, they have little to no personality and they follow orders given by the Jedi to go die fighting battle droids, never realizing that maybe, just maybe, they’re the bad guys in the story.
Bad Batch is more focused on just five (six really) characters. And they’re all instantly recognizable, they all have both a very distinctive appearance and personality. While they’re not the most original characters at the moment, they’re a good starting base, and I’m sure that if the show is given the time to grow, they will nicely grow with it (that’s the Filoni touch here). So yes, in two episodes, I already care more about these clones than I ever cared for the clones of Clone Wars in 4+ seasons. 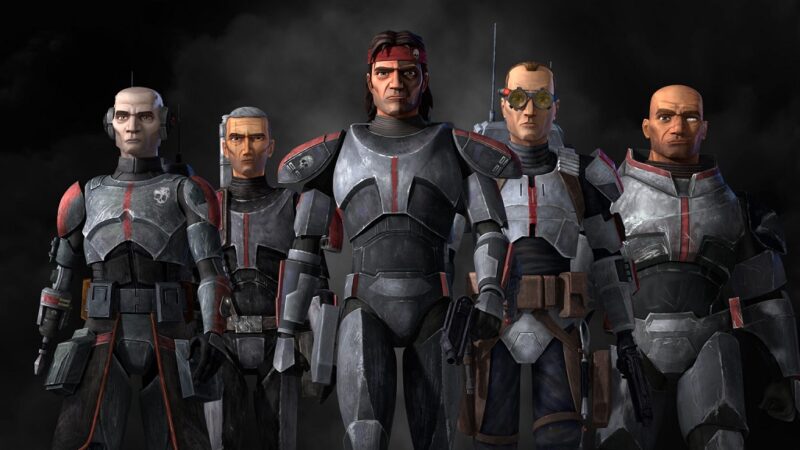 Not all is perfect, for example, Wrecker (the “brute with a big heart” of the group can be a bit annoying at times, especially his voice). But as I said, they’re a good starting base.

Two things I really liked are:

I wondered how they were going to find an interesting antagonist. They found one in a very original and interesting way. I don’t want to spoil anything here.

The kid sidekick. Yes, the show has a kid sidekick! We all know that a “kid sidekick” is usually unbearably annoying and can destroy a show that would have been good otherwise. Well, let me kill the tension right away. This kid sidekick – her name is Omega – is nothing like that. None of the usual tired tropes used to depict kid sidekicks is used to characterize her. She’s likable, relatable, and you care for her very very quickly. OK, she does get into trouble as early as episode two, but in a way that makes sense and is well done and it leads to something that could be the heart of the show. How do soldiers who only know war and whose only human interactions their whole lives were with other soldiers learn how to take care of a child? And really, I feel that calling her a “sidekick” is unfair. I suspect that she could become the main character of the show sooner than later.

Finally, the universe. Sure it’s the Star Wars universe, if you’re still reading, I will assume that you know it quite well. However, it’s a time period that we think we know, but that we actually don’t really know. The first days of the Empire. And the depiction of that regime change is perfect so far. How democracy is slowly turning into a dictatorship, how the clones who were supposed to protect the people of the Republic are slowly becoming the armed hand of the oppressor. The show is already has a lot of the political undertones that Clone Wars alternately either lacked or underused from fear of being too metaphorical of the real world. Times have changed, I suspect that Bad Batch will not shy away from these issues.

So, all in all, I’m very satisfied with these two episodes. And if you don’t hate Star Wars, may I suggest that to give a look at this Bad Batch?