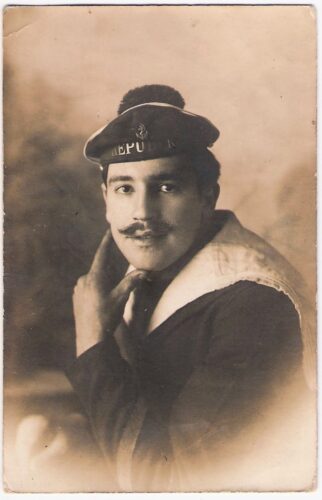 This is a French sailor in the 1920s. So, yes, this picture is about 100 years old. He’s probably my grandfather’s cousin, although I could never really place him in the family tree.

There is a story that comes with this postcard. A small one from the 1990s and a much bigger one that started in 1885.

1885 is the year my grandfather was born. If you do the math, he would have been 88 years old – had he still been alive – the year I was born. For some unclear reason, he married quite late in his life and he was already 55 when he had my father. He died in 1957 when my father was a teenager. Therefore, as you can imagine I grew up not knowing much about him, and the little I know pertains to his later years.

I can’t remember the exact year. 1996? 1997? One of these. I just remember that I was in college. It was springtime and it was a four-day weekend (probably May then, we have a lot of holidays in May in France). As it often was the case back then for long weekends, I had returned home from Toulouse, an hour or so away, where I lived at the time because I was a university student there. My group of friends was spread out over a few cities at the time, and long weekends were always a great opportunity to meet and spend time together as a group, just like in high school.

One phone call. Two phone calls. Three phone calls. Ten phone calls? I can’t remember how many friends I tried to call on that Friday evening but I couldn’t reach a single one! For some reason, none of them had returned home. Don’t forget that we’re talking about a time when cell phones didn’t exist and the Internet was just something I had vaguely heard about:  getting together with friends required some levels of planning we don’t need anymore. It especially involved a lot of back and forth on the phone with various people to finally set a time and place to meet.

Well, that night the place was going to be my parents’ house. The time was the entire weekend. I would be the sole participant.

Did I mention that my parents were away for the entire weekend too?

In other words, I was going to spend four days entirely alone.

After watching five or six movies, I decided that I had enough. I love cinema more than the average person, even more so back then when I actually had the time to watch movies. But I don’t love cinema to the point of watching movies for four days non-stop. Boredom was slowly but surely creeping in. I hate being bored. I mean, I’m usually never bored; I always find ways to not be bored (it comes with growing up without siblings nor any kid my age in my neighborhood). I even have trouble understanding people who say that they’re bored. Yet, on that night, boredom was about to win over me for the first time in many years. At that point, I really wasn’t sure how to spend the remaining three days.

I hear some of you who are suggesting that I should have just picked a book. This is their way of keeping boredom at bay.
Yes, good idea. No, really, great idea.
But, you see, back then, I was a literature major. I used to spend my weeks reading, pretty much constantly. And while I loved it then and I still love reading today, I’m sure you’ll understand that I was not always eager to do on weekends what I always did on regular days. You know, the whole point of a weekend is to take a break from the five other days.

Trying to fight boredom in any way possible, I started rummaging through random stuff in the house, to see if I could find something interesting. I soon noticed an old box that had been sitting on top of the shelves in the upstairs living room for a few years. Its content had never grabbed my attention before.

I grabbed it and opened it. Inside, were several hundred old postcards (about 500). And by old, I mean old. Almost all of them dating from between 1900 and 1925!

They were my grandfather’s correspondence, covering his younger years before he met my grandmother. It also was the time of World War One. My grandfather never got drafted (it seems that he had some health issues at the time), but another family member was. Somehow, his letters to his wife also ended up in the box at some point before it made it to my parents’ home, after my grandmother’s death in the 1980s.

A few years ago, I thought that the content of these postcards should be put online as an archive from the early 20th Century. About a decade ago, I started a blog in French transcribing them. It’s still online, you can check it out there, but it required more time than I could afford. I never finished it.

So here we go again. I’m going to try putting this content online again, both in French and in English. It’ll take the amount of time it’ll take.

I wish I could sort them before publishing – so that you can read the stories more or less in order – but that would be just too much work. Not to mention that I only have the digital scans with me, the original postcards are still in my parents’ house. One day maybe. But I like this disorganized way to learn about these people. Like pieces of a jigsaw puzzle. Like old memories coming back to the surface.

In any case, I hope you’ll enjoy these memories from a new century. 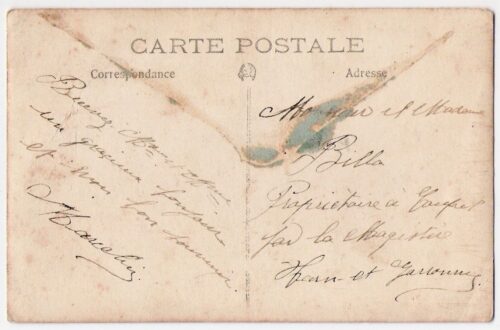 The sailor’s first name was Marcelin (probably a nickname for Marcel). Here, he’s writing to my great-grandparents and doesn’t really say anything of substance, just polite niceties, probably not to send just a picture alone without words. As a matter of fact, it’s interesting to see how portraits were printed as postcards and sent to family and friends this way. There are a few more coming sooner or later. 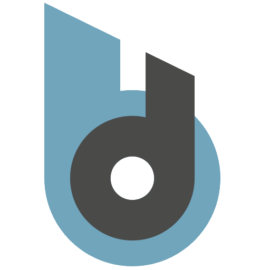 Don’t miss this on: The Swamp

Father and Son in Lego