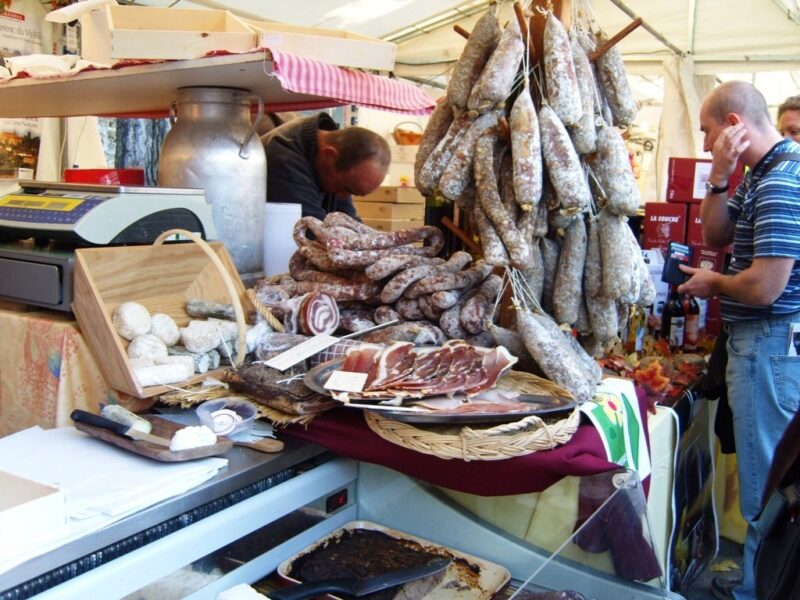 Saucisson (and to a lesser extent dried ham) is – in my opinion – one of the most important elements of French food.

Strangely, foreigners rarely mention it when they think of French cuisine. I assume that it is because they simply have no idea what it is or how to eat it. Or some are too “squeamish” to dare to buy some. I think I would be if I was in a strange land and I saw such strange-looking food items that I’m not familiar with. Willing to try, but having no idea what to do with it, so I’d pass.

Not mentioning that it’s mostly food you eat at home, not so much in restaurants, and foreigners mostly know “restaurant food” when they think of French cuisine.

So if you’re in France and never had saucisson, or during your next trip to France, do me and yourself a favor, just buy some (you can find it in any grocery store), keep an open mind, and have some.

How do you eat it? You’re asking me?

You grab it, you grab a knife, you cut a slice, you peel the slice and you eat it.

And yes, every time I live abroad (which is most of my adult life) it’s definitely the food item I miss the most (with cheese), and I gorge myself on it every time I’m in France, or when I can get my hands on some. It happens sometimes in Japan, imported overpriced saucisson, but I don’t care, I’ll pay the extra money for saucisson.