A Christmas Story with Neil Gaiman

Neil Gaiman is a pretty swell dude, but you already knew that.

Here is what happened.

A couple of days ago, I was near the end of the fifth volume, A Game of You, when this panel appear at the turn of a page: 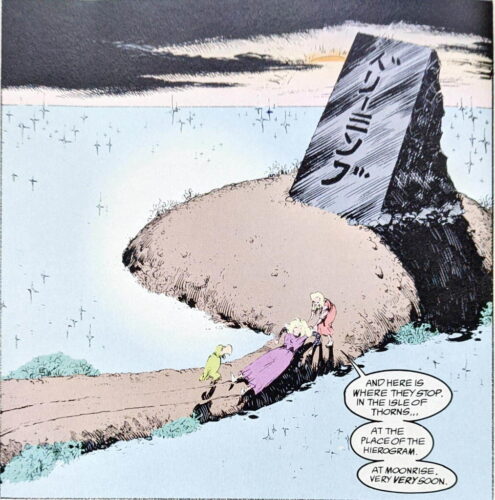 A Game of You, Chapter 5, 1993 compiled edition, p140, first panel
Artist: Shawn McManus (it also could be Bryan Talbot or Stan Woch)

Twenty years ago, I didn’t really think twice about it; the inscriptions on the stone were some imaginary magical runes of some sort, right?

Well, not exactly. You see, now, I’m a bit older, and more importantly, I live in another country that is neither the US nor my home country. A country that happens to use these “imaginary magical runes” as one of the scripts for its language.

Yes, these are katakana, usually used in Japanese to transcribe words coming from a foreign language (nowadays, mostly English). We’ll excuse the artist for the first character as it looks more like a 人 with a quotation mark than the ド that it is, but the rest of the word leaves little doubt. It is ドリーミング, or if you can’t read Japanese: Dreaming!

After my ah-ha moment, I posted the following thing on Mastodon (you should join if you haven’t done so yet):

@neilhimself I do have questions!

You may have fooled me 20 years ago with this “mysterious, magical, and unknown” script, but not anymore, now that I live in Japan.

And then, this happened:

“Fooled you in what way? The idea was always that it was katakana for Dreaming.”

Regarding the katakana in Sandman. 20+ years ago, I had no idea katakana even existed, so I just assumed it was some sort of “magic rune.” Any reason for that choice? (maybe it’s in the following episodes, I’m not there yet)”

“So that one day the people who thought it was just magic runes would realize that it actually said something, and smile.”

I thanked him profusely, even added that his talking to me now probably ranked as number 2 for the best Christmas present ever (I didn’t tell with one was demoted). Of course, I know that’s not the reason why he decided to use katakana there, but I think I like this answer better than a more technical one.

So, yes, regardless of the rest of Christmas will unfold, Neil Gaiman made my Christmas this year.

Thank you, sir, and please continue to make us dream with your magical writing for many more Christmases.

You can follow him there on Mastodon: @[email protected] (and yes if my handle is DavidBhimself on certain social media and others, it’s totally because of him – as well as Mark Hamill whose handle also used to be @Hamillhimself on some places – incidentally both of them are awesome with fans on social media)

And you can follow the whole conversation there (maybe it’s not over, who knows?)