Father and Son in Lego

Becoming a father brought a new unexpected hobby to my life. I started collecting Lego!

Strangely, I am not really a collector at heart and I never was a big fan of the toy as a kid. My go-to toys always were Playmobils and Star Wars action figures as far as I can remember.

I fell into Lego after fatherhood made me return to toy stores for the first time in a few decades. There, one day, I stumbled upon the Lord of the Rings series of Lego. I can’t explain why, but I totally fell under the charm of little blocky plastic Gandalf, Frodo, and company.

Well, dear friends and readers, let me tell you one thing. Lego blocks are a hard drug. You think you’re just buying one set, just this one time… And a few years later, your house is full of the thing, and you realize that you have spent way more money than you should have and bought hundreds and hundreds of blocks that are now covering too many of your shelves.

The worst part? I always rationalized it by saying that they’ll be for my kids when they’re old enough. However, while my daughter is somewhat interested in Lego, she rarely plays with them, just builds stuff. And, my son barely cares about them. He likes the idea of Lego, but pretty much never touches the ones I got him. I’m afraid that as they’ve been around the house since they were babies, they just take them for granted. When asking my daughter why she never played with her Lego, just built them and left them on a shelf, she responded “Isn’t it what you do with yours, dad?”

My son is still only five, and he likes playing with toys more than my daughter, so I’m still holding hope. And they do like inventing and building houses for their other toys with their old Duplo blocks. So, there is that.

Ok, I make it sound all negative, but if I fell hard into it, it’s because it also has lots of good sides, and honestly, building sets has been an incredibly relaxing activity that has done wonder for my stress level and overall mental health these past few years. It seems that I’m not the only one using them for this purpose, and the Lego Company has started noticing. For example, did you know that they recently released a very official ASMR white noise album? (I’m listening to it for the first time as I’m typing this post – to tell the truth, I’m not exactly sure it’s a good idea, but I like how they’re not afraid to experiment like this) As well as more and more sets explicitly aimed at adults (actually, I find most of these a bit overpriced and not as fun)

Anyway, after building them, I needed to find some use for these Lego if I don’t want them to gather too much dust in my home office. Once in a while, I takek pictures of them in various contexts. I’m quite happy with a few. I’ll publish them here one of these days.

Also, talking about my son earlier, just like every five-year-olds, he sometimes says the funniest and/or most outlandish things. So, I decided to try translating them in the form of Lego webcomics.

Here is the first one from a year ago, when the coronavirus pandemic first started to arrive in our area, and he started becoming aware of it.

I was minding my own business, in another room of the house when suddenly… 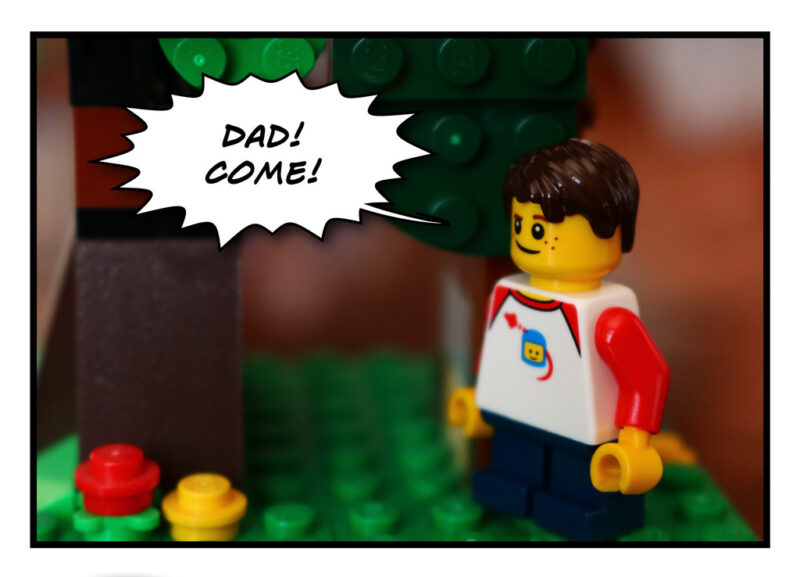 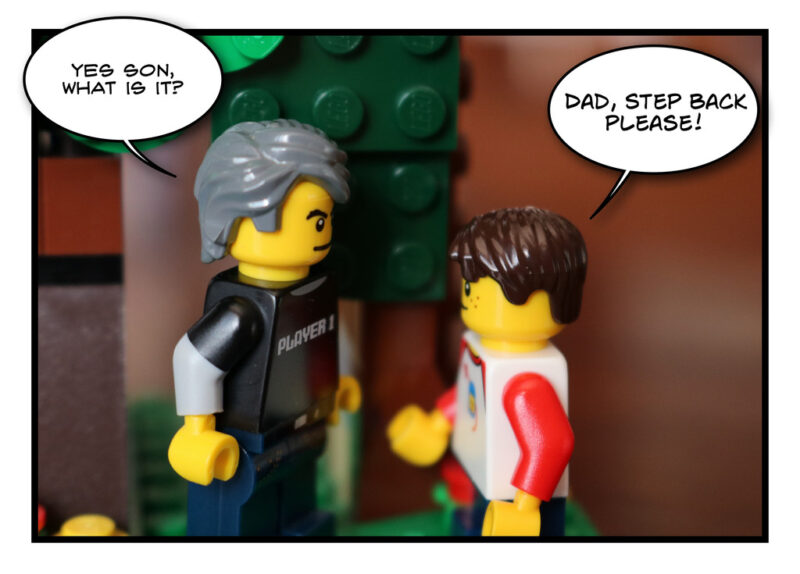 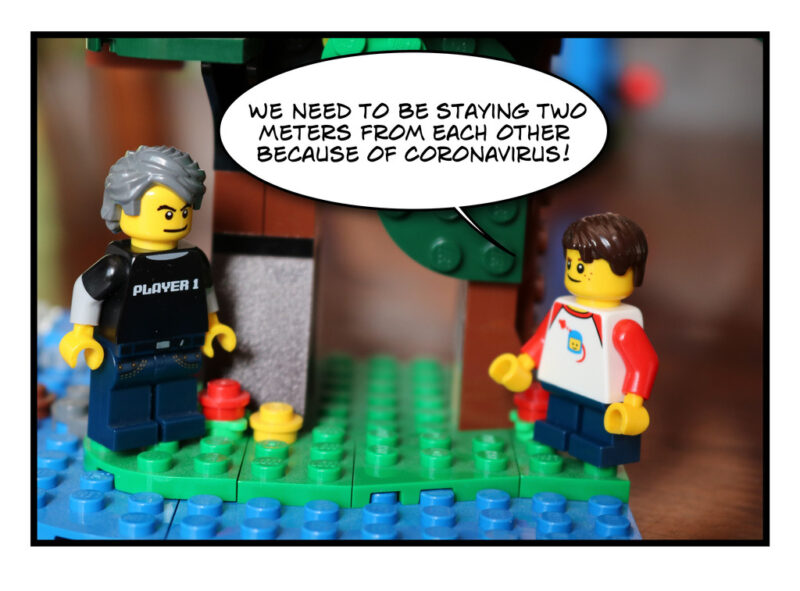 But… I was, before you called me…

That was after returning from preschool on the day he learned about social distancing.