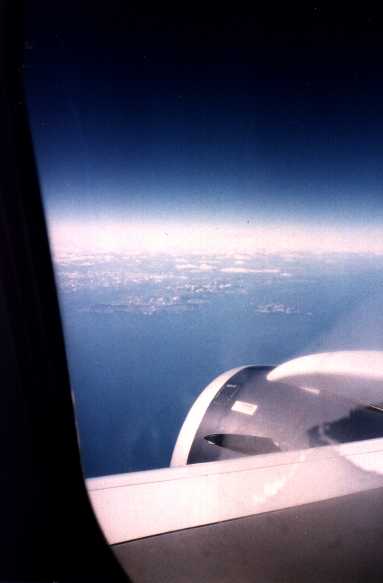 This picture dates from July 1997.

It was the first time in 14 years that I was on a plane. I was a child the previous time. It had been a wonderful trip to Greece that I still have fond memories of.
It was the first time I left Europe. I was heading to Pittsburgh from Toulouse, via London Gatwick. I was going to spend a month in the United States and I was accompanying a friend who was going to spend a year there.
It also was also my longest flight at the time. It “only” was eight hours. That record was to be broken several times since.

I took this picture when I finally saw the land, after what seemed like an eternity – the plane had only been flying for five hours. What I felt must have been somewhat similar to what the lookout guy, in the crow’s nest of the Santa Maria, felt.

My first reaction was to snap this picture. I wasn’t really sure where we were. The picture itself isn’t that good. I was just excited to see the New World for the first time in my life.

A few minutes later, we flew above the coastline and I could see all of these little white dots in the fjords. I thought it was Canada, near some coastal town. I thought I was witnessing a gathering of sailboats like they must often do in the summer. Something like that.

It’s only when we reached the sea again, and then we actually arrived above Canada that I realized that we had just flown over Greenland. Those weren’t sailboats at all but icebergs. For the first time in my life, I had flown over and saw an uninhabited region.

I remember it being a very strange feeling. As a European, those were the kinds of places I would only see in documentaries, not for real, not even from a plane.

Interestingly, while I’ve been to seven new countries since that day, while I have spent almost 17 years abroad on three continents, I have yet to go to either Canada or Greenland.

Tags:1997Greenlandplane
previousWhy do the French hate the British so much?
nextAgen, France