Today, a postcard showing the visit of President Poincaré to Lyon in May 1914.

One of the fascinating things about these postcards is to see how they were used at the time. Here, a commemoration of a presidential visit. I’m tempted to say that they served as the news, but I’m not too sure that’s applicable. Of course, the immediacy of information is a fairly recent phenomenon (although special editions of newspapers are not a new thing), but here we are talking about an event that occurred in May, in a postcard sent at the end of August. So I’m leaning towards the commemoration of an event. A presidential visit was a big deal before the age of planes. 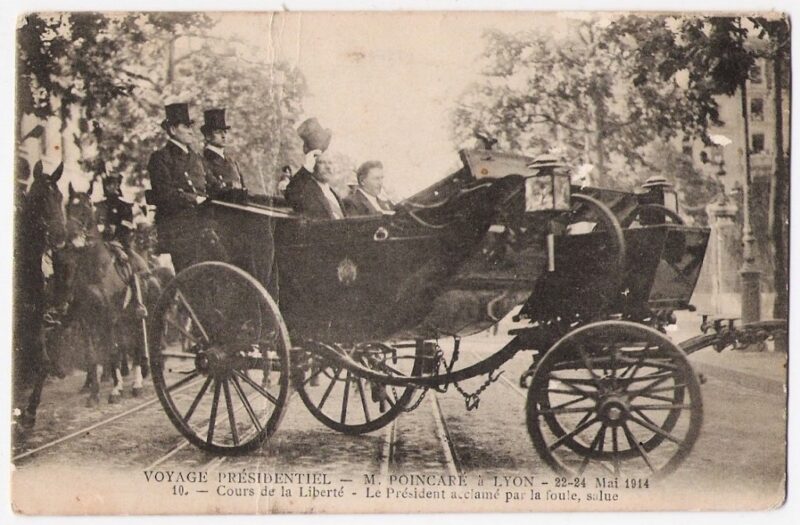 I was going to say that I don’t know anything about this presidential visit, but sometimes the internet has good surprises for us. Indeed, I’m learning while typing these lines that it was a visit to the International Urban Exhibition of Lyon which took place during the year 1914.

So if the front of the card has no connection with the First World War, things are a bit different in the back.

The postcard is dated August 28, 1914, three weeks after the declaration of war by Germany to France. We find Jean Sazy writing to his wife Jeanne. He is in a hospital in Lyon, but he mentions being in good health. I assume that he’s there for a series of medical tests after his mobilization or something of the sort. His location in Lyon suggests that his regiment is stationed there while waiting to be sent to the front. We are still quite far from trench warfare. Battles were fought mostly on the border and in Belgium during the first days of the war. However, five days earlier, the defeat at Mons triggered the beginning of the Allied retreat to the Marne and the beginning of the invasion of Northern France by the German armies.

The content of this card is still very remote from all that. Jean seems mostly bored in Lyon and almost complains about not receiving enough news from his family. As I mentioned in the previous card, although he will never tell the details of his life as a soldier, the slow evolution of his tone in his writings is as telling as it is sad.

Here, this is one of his first cards, he is only a soldier by status and has not yet met the front and its battles. That will come. Too soon. 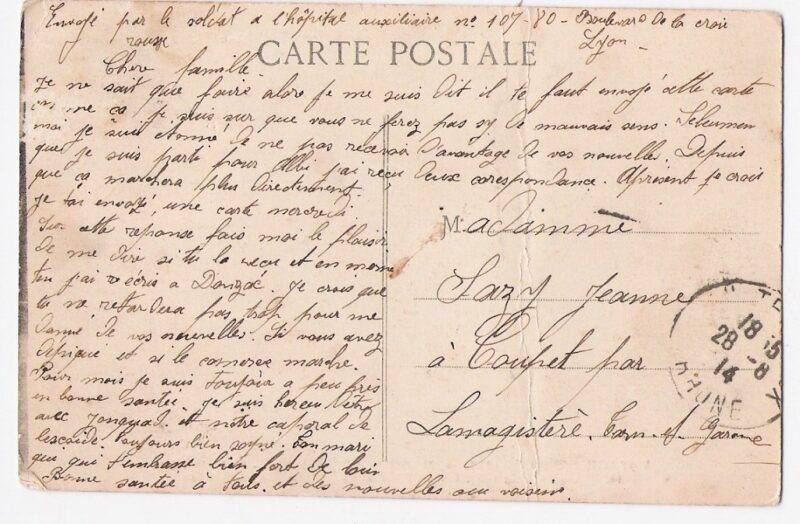 I’m transcribing the content of his card here, not always easy to read, even a harder translation. I have corrected his most obvious mistakes, but some terms remain strange. Are they expressions that have become obsolete nowadays? Are these terms that I can’t decipher because of weird writing or spelling mistakes? Not always sure.

I don’t know what to do so I said to myself that I should send this card to be sure you won’t worry anymore. However, I am surprised not to receive more news from you. Since I left for Albi, I only have received two pieces of correspondence. From now on, hopefully, it will be more direct.
I sent you a card on Wednesday. In your next mail, please tell me if you have received it, and at the same time, I have written to Donzac (1). I hope that you will give me some news as soon as possible. If you have “défriqué” (2) and if business is going well.

As for me, I am pretty much in good health. I am happy to be with Jonquad (3) and our corporal de Lescaide (3) is always looking neat / well-taken care of (4).

Your husband who is sending you a big hug from afar.
Hoping good health to you all and please say hello to the neighbors from me.

Tags:1914Jean SazyLyonWorld War One
previousBack to School
nextThe Child and the Legendaries