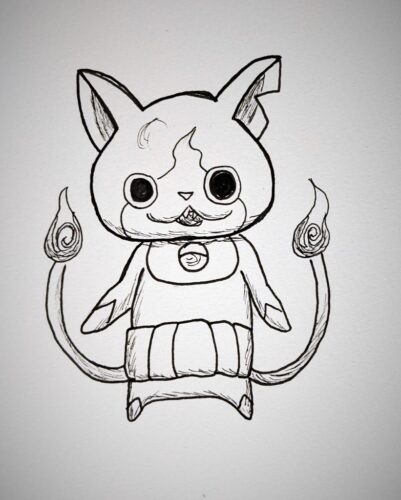 Not very inspired and not much time for this entry of Inktober 2021. I’m already several days late. Whoops.

A very peculiar watch, as it is Yokai Watch, a famous Japanese video game, manga, anime, etc (pretty much everything is multimedia in Japan these days). Well, I didn’t even draw the watch, only one of the main characters. The name is Jibanyan.

Actually, I don’t know much about Yokai Watch (by the way “yokai” means supernatural being, heavily leaning on the ghost side, although, not always). I never paid much attention to it, and even my kids have never expressed a very strong interest in it.

The thing is that when I arrived in Japan, 10 years ago next month, Yokai Watch suddenly became quite a big deal. It became ubiquitous for a while and even temporarily replaced Pokémon as the main popular culture multimedia cute monsters thing in the country. And then, after a few years, it kinda waned, and Pokémon took the number one spot back again, becoming even more popular than ever.

I may draw a Pokémon before the end of the month, I always seem to do it at some point.

However, I gotta admit that I’m not too sure why, but I don’t really “feel” Inktober this year. Maybe the prompts don’t inspire me so much. Maybe something else. Not sure. Sometimes, I think that its challenge aspect, the whole 31 drawings in 31 days, is not really for me. I actually like the Inktober 52 idea much more (52 drawings in 52 weeks) and I may get back to it sooner or later.

So, what I’m going to do for the rest of the month is not try to get the 31 drawings done, but just pick the prompts that inspire me and simply skip the other ones. Or I may just return to doing Inktober 52. I only stopped because Covid killed my rhythm with many things when I became really busy because of it.