I’ve been to Baltimore once, and I only spent a few hours there. It was in November 1998, during Thanksgiving week. A couple of French friends and I went on a small road trip for a couple of days. We stopped at Baltimore, spent the night in Delaware, and a couple of days in Philadelphia which was our main destination.

I had moved to the US during the previous summer, and it was my first time really leaving my new home (Morgantown, West Virginia). It’s also the day when I lost a certain innocence that I had about the United States.

We first stopped and visited the Inner Harbor. It’s a very nice looking and quite touristy area. Despite not being a big fan of large cities, I must admit that I liked it. It had a good atmosphere to it. Maybe something to do with the waterfront. I like nice waterfronts. 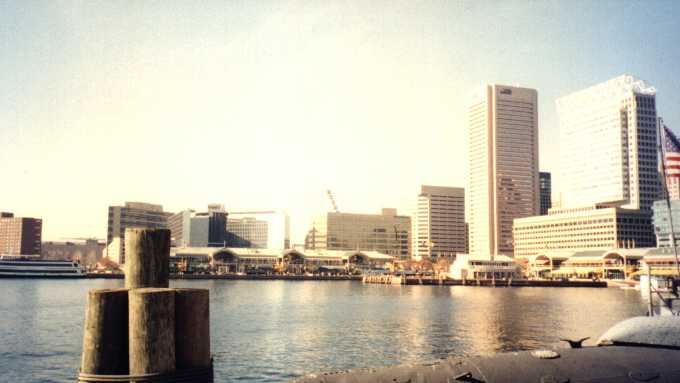 After a little nice stroll, we wandered away from the harbor, and looking for a coffee, we ended up at a McDonald’s. We were pretty much fresh out of France, and as such, we were greatly confused to not find a café at every corner or so and McDonald’s was the only establishment we found that could indulge our caffeine addiction. Starbucks hadn’t taken over the world just yet – I will assume that there are a few dozens in downtown Baltimore nowadays.

After a few minutes, I realized that there were almost no white people in the place, and the man sitting at the table next to us started giving us some pretty nasty looks that clearly meant something along the lines of “why are you here? you don’t belong here.” When he heard that we were not speaking English, he became intrigued enough to approach us and ask us where we were from. Upon hearing the answer, his face suddenly lightened up and he became really nice and started talking with us… Oh, just the usual small talk, nothing of substance: “how long have you been here? is this your first time in Baltimore?” and whatnot.

That scene (apart from the initial nasty look) is nothing special if you know the US well enough, and I had people approaching me this way countless times. What really intrigued me was the way his attitude drastically changed once he learned that we were not Americans. We suddenly ceased to be “White people” to become “French people.” Why was he unhappy to have white people in “his” McDonald’s but was pretty excited to meet French people? This is the question that lingered in my mind as we left McDonald’s and resumed our day.

We kept on walking, more or less randomly, deciding to explore the city a bit further. I think we were looking for Edgar Allan Poe’s grave.

We never found it.

We soon arrived in a street that attracted us from the distance. It seemed quite lively compared to the other streets we had been walking on and that were almost deserted. At first, nothing seemed out of the ordinary. However, the more we walked, the more the looks towards us were more and more insistent. To the point that there started to be a tangible feeling of uneasiness. We were White tourists in a Black neighborhood. We didn’t belong there and were not welcome. And people were showing it more and more as we were walking deeper inside the neighborhood.

I was unsure what to make of that, but some of us were getting scared, especially when we started being heckled and when an empty bottle (in a brown paper bag) crashed near us. It could have been an accident, but somehow I doubt it. We quickly left and walked back to the Inner Harbor as quickly as possible.

I’m not exactly sure where this was. Looking at a map today, it may have been around Howard Street. I remember that there were tracks on the road. 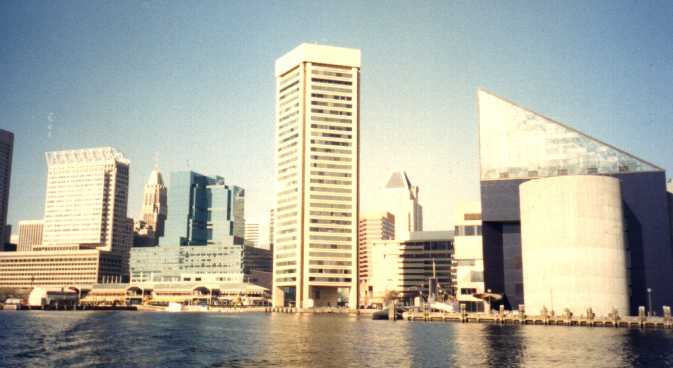 So, yeah, it is in Baltimore that I realized that racism in the United States wasn’t just about a few people not liking some people from the other skin tone.

I understood that segregation was still alive and well, that there were areas where people of different ethnic backgrounds just wouldn’t mix.

I didn’t fully understand back then why our mere presence elicited such negative reactions, coming from several unrelated people. It wasn’t just a couple of weirdos reacting to us. Our presence was troubling some sort of established order.

It took me a little longer living in the country to fully understand what was at stake during that incident. How these negative reactions toward us were, in a sense, a reaction of self-defense from an oppressor that had invaded their safe space. When that usually happened, it probably often spelled trouble one way or the other.

Twenty-three years later, the situation doesn’t seem to have changed much. As I’m finishing typing this, I’ve just learned that the police killed another Black person today. Once again, a teenage girl died for having committed the crime of being Black.

I want to be optimistic. Today, there seems to be a bigger and wider awareness of the structural nature of racism and racial oppression in the United States. More and more people with power seem willing to change this situation. But the reaction in the opposite direction is as strong. What does the future hold for the country? I don’t know.

I want to be optimistic. But it’s hard…