A few days ago, I finally started reading Dogs and Demons by Alex Kerr, whom you’ve probably at least heard about if you have the slightest interest in Japan. If you haven’t, you should, he’s one of the most important “Japanologists” alive today.

I’m not going to review the book here (I may do it later, or not), but in short, he talks about the Japanese miracle (you know, the whole “going from being a ruined and destroyed country to the second richest country in the world in just a few decades”) has a very dark side that is still present today and will not go away anytime soon (its roots dating from well before the postwar era). Indeed, he published the book in 2002, and most of the problems the author mentions are still alive and well today.

A few days ago, while taking a walk in my neighborhood, I was thinking about the book, and suddenly, a lot of the things Kerr talked about appeared right in front of me. Not that I hadn’t noticed them before, but it became more explicit and unavoidable. It also gave me the idea for this post, which may or may not become a series of posts. We’ll see. If it does, I’ll call it:

Did you notice how almost everything that Westerners write about Japan online tends to either only focus on its good aspects (I’m guilty of that too, check out Setouchi Explorer if you’re not familiar with it yet) or on the contrary, they can’t stop bitching about the country and its shortcomings. Although most of the time, it’s not really about the country itself, but rather about them having a hard time being foreigners or immigrants. I don’t blame them, it’s a difficult thing to do. The issue is when they don’t realize that it’s about them and not the country itself. But I digress here.

In this post (and future series?) I’m going to focus on the bad sides of the country, more or less following what Dogs and Demons talks about.

Starting with the fact that Japanese cities are ugly.

Don’t look at me with these big surprised eyes. Forget the temples for a minute and think about regular streets, and regular neighborhoods. They’re just a big utilitarian mess with no urban design or urban planning involved, and where there was one, aesthetics was never on the list.

It’s true that after 10 years in the country, I got used to it and I rarely pay attention to it anymore, but then I remember one of my very first memories of Japan.

I left the airport less than an hour ago. I was riding the bus to the city that I was going to call home a couple of years later (I didn’t know that yet). We were crossing Kobe when something suddenly hit me. We were on the highway, on one of these giant overpasses that go on for kilometers. I remember the scene very clearly because of the eerie feeling I had to be on an overpass that I had already seen before, but back then, 14 years earlier, it was on TV and it looked like this. (see why the eerie feeling?)

The only answer I could come up with, trying to find some logic in the thing, was that in the aftermath of the 1995 earthquake, the city had to be rebuilt as fast as possible and they didn’t bother with urban planning.

If you’ve spent more than a couple of hours in Japan, you know that it wasn’t the reason. It was not just Kobe. It’s every city in the country!

There are a bunch of reasons for that, some acceptable, some not, but they’re not my point today.

My point is that yes, Japan can be beautiful, but Japan is also quite ugly, and I’m going to document it here once in a while.

We’re starting with one of the two rivers in my neighborhood:

As Alex Kerr mentioned, it seems that Japanese people hate their rivers with a passion. Close to 100% of Japan’s rivers have become chutes at least in parts. For example here, I understand the need for walls; buildings are nearby and typhoons are a common occurrence, small tsunamis could, in theory, happen (but the sea is very shallow here, so they’re not a big risk). But why is there concrete on the bottom of the riverbed exactly?

I’ll probably ask “why” a few times in this post and future ones. I know there are reasons for this or that. I often know the reason, and it’s not always because construction companies “own” public authorities. Yes, most of the time, there is a “why” but the real question should be “Was it really necessary? The rest of the world is doing fine without those…” (and then some Japanese people are going to tell me “But Japan is special…” Look up Nihonjinron if you don’t know what it is). 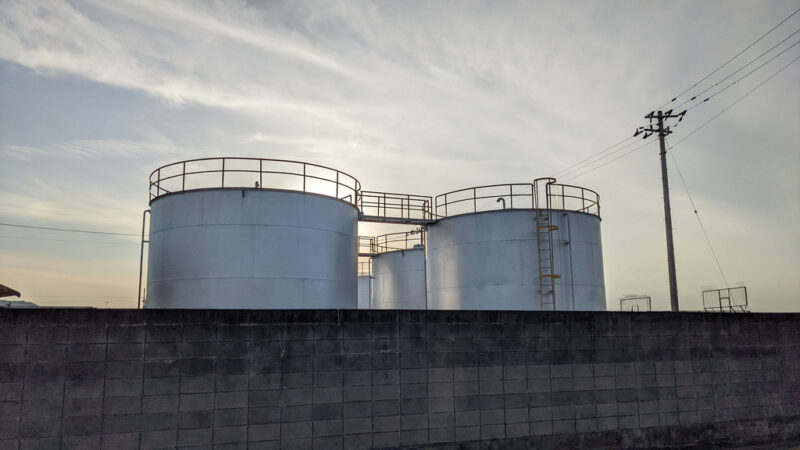 OK, this picture may be a bit unfair. Gas tanks like this one are standard all over the world, and they’re by the sea because it’s a spot where boats can go to fill up their own tanks. Still, why exactly is this spot located right next to a residential neighborhood? 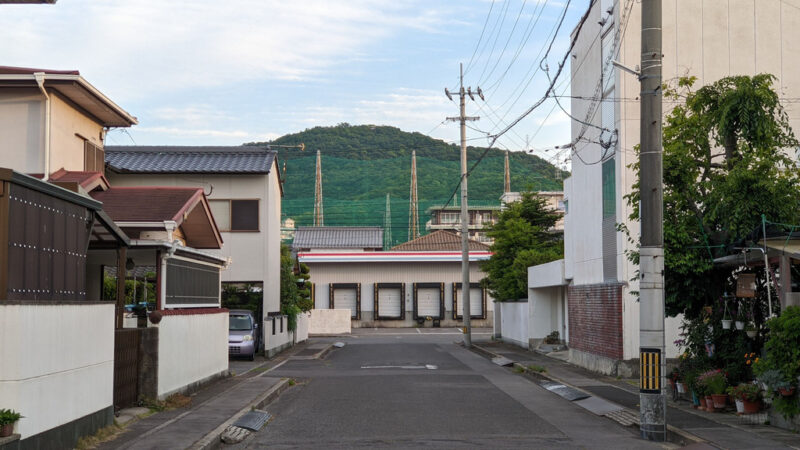 Japanese urban planning at its best. Here is a quiet residential neighborhood with some warehouses right in the middle (the one pictured here is far from being the only one). In my country, you’d never find such warehouses anywhere near a residential area. Oh, and you’re wondering about the ugly giant green net in the background? It is a golf practice range. I feel bad for the people living right next to it. It’s loud from dawn to well after dusk, and I can’t imagine the giant spotlights near their houses at night. 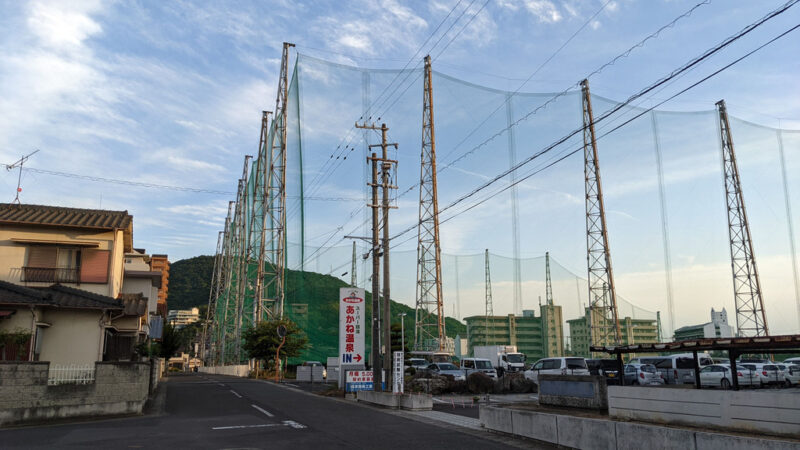 Here is the golf practice range from closer, with another ubiquitous element of Japan’s cities: parking lots. It’s pretty much impossible to park in the street in Japan, so parking lots are everywhere.

If you wonder why it’s so hot in Japanese cities in summer (I mean beside global heating), look no further. Don’t try to find soil, trees, grass, or anything that helps cool a neighborhood down. There are next to none.

OK, I’m lying a bit. There are trees.

Here is a typical tree in my neighborhood: 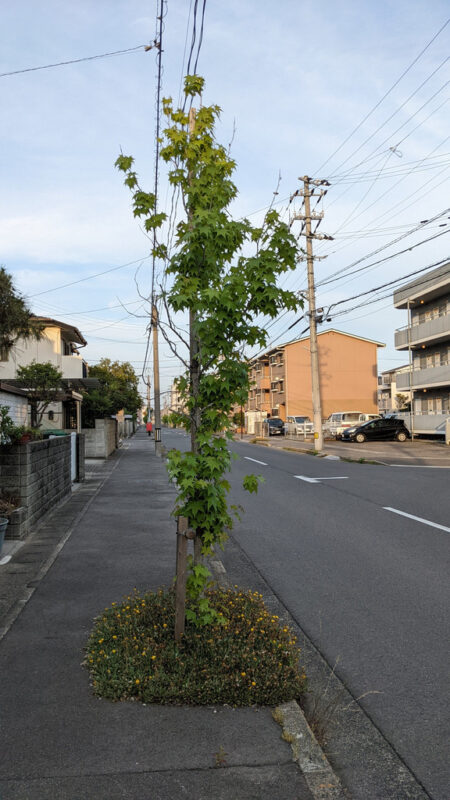 Every year some municipal employees (I assume they are, but they could be private contractors, I even wonder if municipal employees not working in an office exist in this country) come and cut down pretty much every branch of every tree lining the streets. So trees never get to grow. Apparently, it seems that they even found a way to grow leaves on their trunks in order to survive.

And why are trees pruned so intensely? Probably because of dead leaves. Dead leaves rank high – probably in the top five – on the list of things that Japanese people hate and find totally unacceptable. So a tree having branches that produce leaves that will eventually die and fall is totally unacceptable for most.

Why even have trees in the streets then if it’s the biggest they’re allowed to grow? Your guess is as good as mine. Peeing spots for dogs is the only answer I could find.

And finally, you may know that I live on the coast (if you didn’t, the first picture was a hint), otherwise, I often post beautiful (I think) pictures of this coast on my social media accounts (links at the end of the post). Have you ever wondered why I never post pictures of the beach?

Well, here is one: 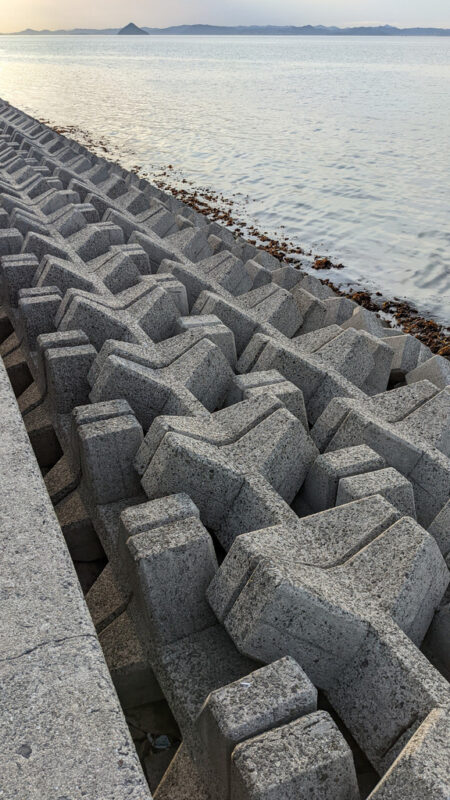 You’ve just been introduced to the infamous Japanese tetrapods! Ubiquitous along the Japanese coast! Placed there to – in theory – avoid erosion. In practice, they often accelerate erosion of the underwater soil near it (as sand is more easily displaced by currents and such), but I guess the tetrapod-making companies must be kept afloat at all costs.

That’s all for today. This was just a glimpse of how Japan can be quite an ugly place at times, mostly because city planning seems to be an unknown concept here. And also while Japanese people always talk about nature and it’s true that they love the idea of nature, they actually hate real physical nature, and they will not rest until the entire country has been covered with concrete.

To be fair, more and more Japanese people seem to be aware of these issues. Unfortunately, not enough of them to fight the huge inertia of public powers. An inertia coming from the fact that old men don’t like change and if concrete made their country rich when they were kids in the 60s, pouring more concrete must be the answer to every question ever (and its old men who have all the power in Japan, because… well, because Japan). Also, let’s not forget that conflicts of interest are a foreign concept in Japan. I’ll elaborate more one day.

The result is what I have just shown you. And it’s just the tip of the iceberg.

If you’re familiar with Japan, don’t hesitate to share your thoughts in the comments.

And if you found this post interesting, please share it on your social media of choice. Thanks in advance.