Among all of our gardening endeavors of the last few months, we bought a mandarine sapling.

Mandarines, also called Mikan, are very common on Shikoku, many houses with gardens have one tree, so we thought why not us.

As you know last summer was weird, alternating unseasonal heavy rains and the usual scorching heat, and things didn’t always grow as planned in the garden (watermelons, eggplants, and tomatoes did well, weeds too… the rest, not so much).

Maybe because of that weather, maybe because we don’t really know how to take care of a mandarine sapling, the small tree has had a weird summer and early autumn.

It didn’t die. That’s a plus. But it lost all of its leaves.

However, one lone mandarine started to grow at its top, and how it’s starting to ripen! 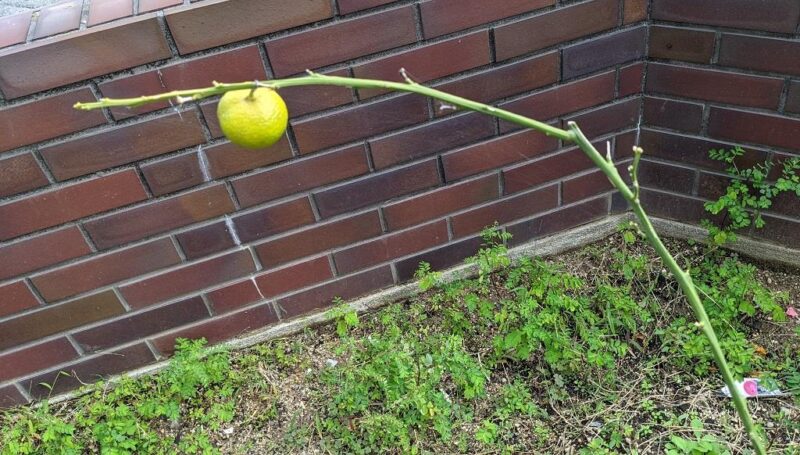 And I’m wondering. Is it a sign that it’s surviving after all, that it’s going to make it? Or on the opposite, is the tree committing some sort of suicide, directing all of its energy toward that lone mandarine, so it survives the tree’s upcoming death and hopefully, the seeds from the fruit will grow into a new tree?

No idea. But if the tree survives, both my wife and I made the promise to learn how to take care of it…

Tags:autumngardenmandarinetree
previousDavidB, Gator & a movie: Once Upon a Time in Hollywood
nextIguana on a piano, Iguana on a window!