Remember my post about the fact that Japan is actually an ugly place?

If not, please, go read it first:

I threatened to do a series of posts eventually.

Well, here is the second one.

Last weekend, I was on Shodoshima, a wonderful island in my region. If you ever go to Japan, it’s one of the places you really should visit. And it’s actually a place that is incredibly beautiful as soon as you leave the main town.

Among my destinations for the weekend, there is a tiny village near the southern tip of the island called Konoura. It’s also quite beautiful, and some of the nicest and most welcoming people I know live there. But even in this little piece of paradise, Ugly Japan managed to appear when you expected it the least. 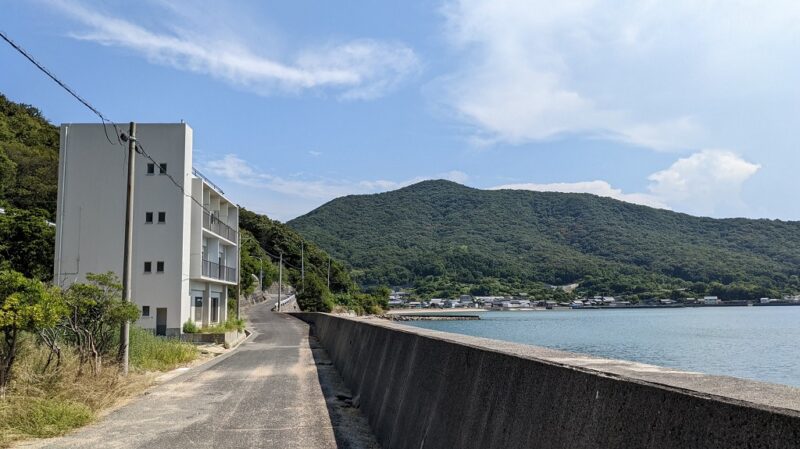 I’m not talking about the seawall here. While it’s an unfortunate addition to the landscape, it is necessary to protect the coast against possible tsunamis and more commonly, strong waves caused by typhoons. And at least most of the shore behind the wall is actually sand and natural rocks. The number of tetrapods has been kept to a minimum.

I’m talking about this building!

Who in their right mind thought that it was a good idea to build that thing there? What is it? I don’t even know. It’s been abandoned for decades, and as it doesn’t really look much older than 50 years old, it must mean that it wasn’t used for long. I suspect that it’s another leftover from the infamous real estate bubble of the 1980s that wrecked Japan (the country has never really recovered from it).

There is some reason for optimism, though. Google Maps shows me that there used to be another smaller (but wider) building next to it, and apparently, it has been razed in the past year. So hopefully, this one will know the same fate as soon as possible.